The curved facade of Forum Horsens stands today as a magnificent landmark for the city of Horsens and has been an important piece in the game to place Horsens on the cultural map. The facility includes a new cultural and sports hall with capacity for 4,500 people, an outdoor stadium and brand new swimming and bathing facilities. 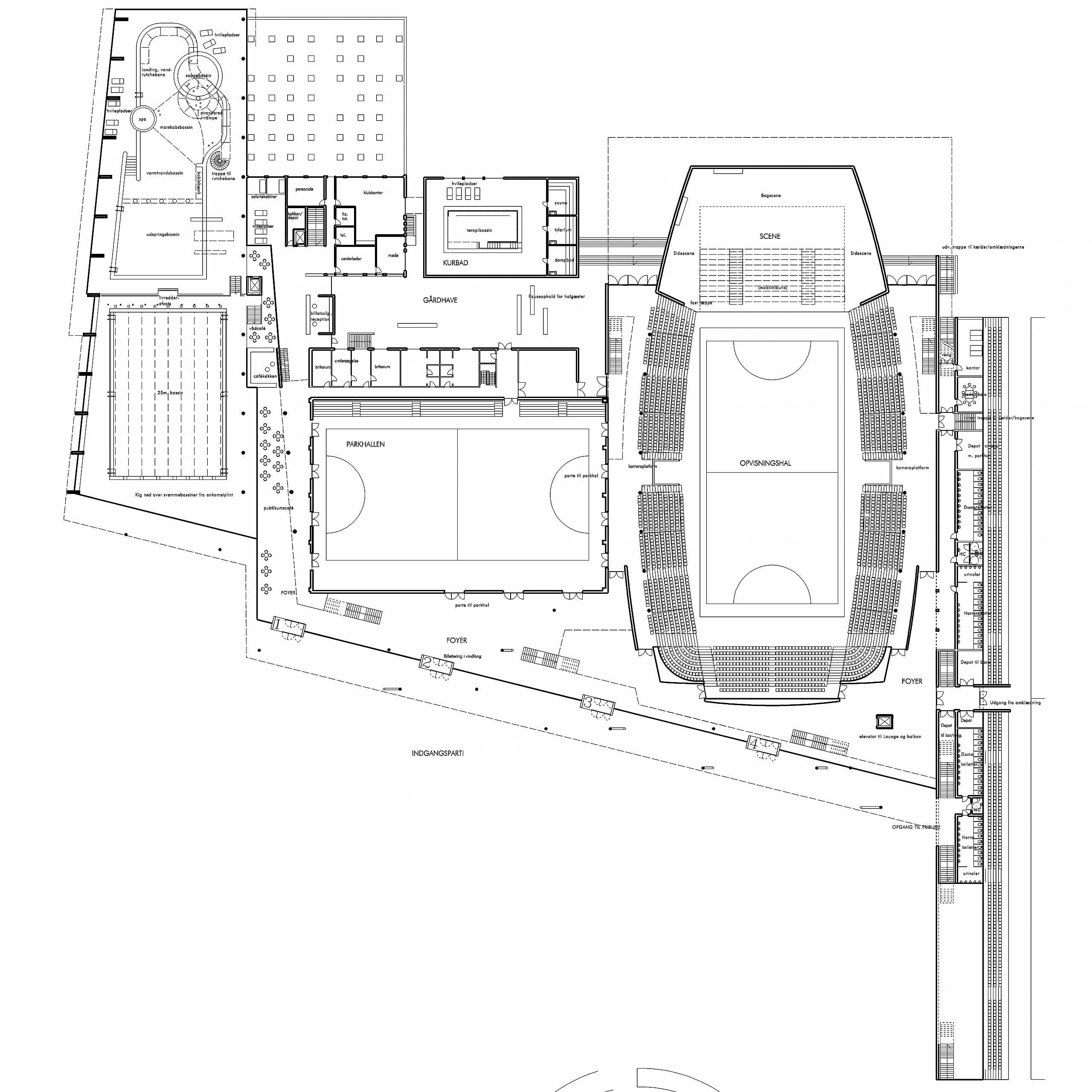 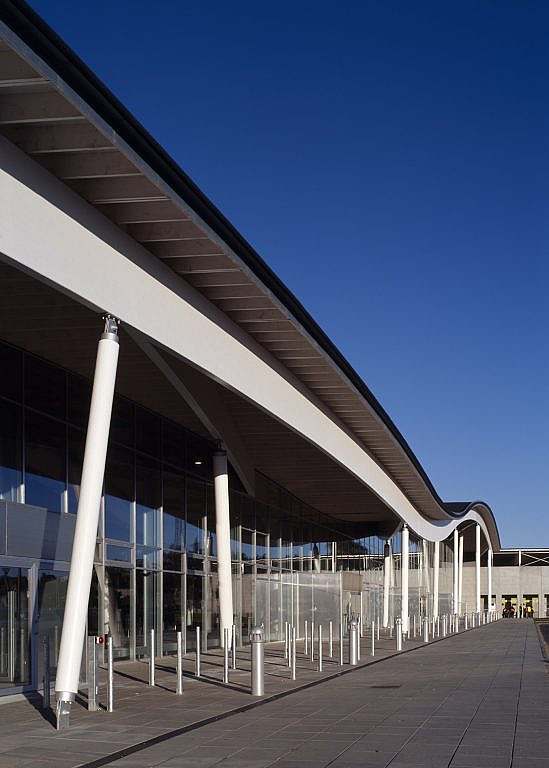 "By exposing the roof as both the character-creating and functionally unifying link, the cultural and sports centre's diverse functions are brought together into an architectural whole." 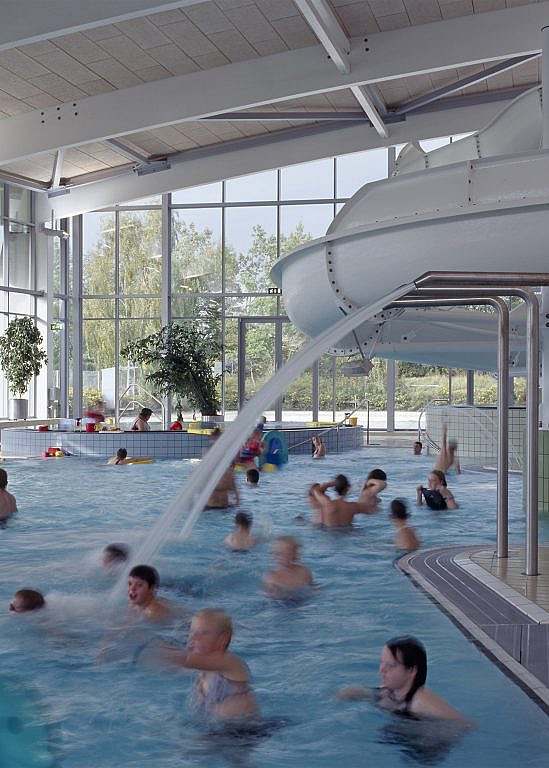 Forum Horsens is built on three architectural pillars, which together form the architectural vision behind the spectacular building and are tied together by the elegant roof.

One pillar is a new landmark for Horsens. The façade facing Langmarksvej acts as a giant image - a clear, easily recognisable and identity-forming figure.

The third pillar is spatial rationality. The compact building is laid out with the shortest possible walking distances and minimal external surface, which results in low operating costs and reduced maintenance. 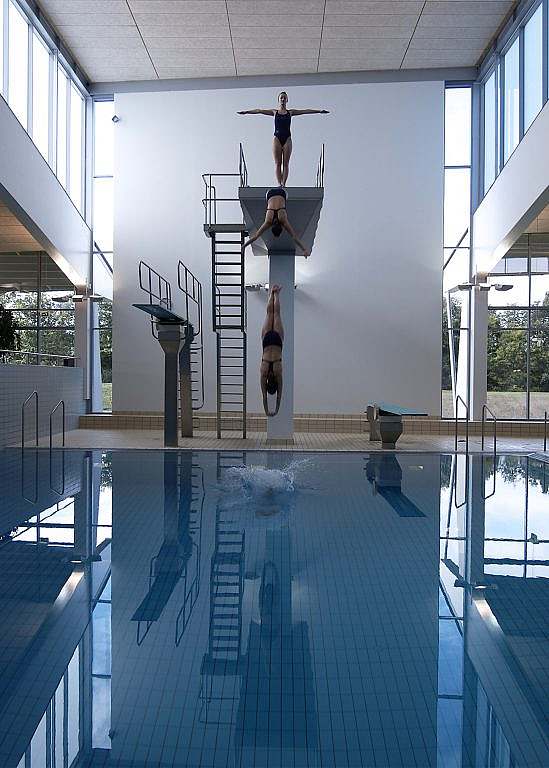 The curved facade as a Horsens landmark

The unifying leitmotif of both the architecture and the function of the extensive sports and cultural centre is the idea of the large curved roof shape that winds through the landscape like a whale in the sea.

Gilleje Sø- og Havbad is a combination of renovation and new construction. The old town hall in Gilleleje from 1939...

In collaboration with the world-renowned lighting company Bartenbach Lightlabor, KHR Architecture has created a lighting...

The architecture of Holy Cross Church is conceived and shaped as an abstraction over the open horizontal landscape space at Jyllinge....

Designer Frederik Sidal is driven by creating something that benefits others, and has sustainable projects on his wish list. Read his advice to other graduates, and which project he's proud to be a part of right now.

Apollogasse is a street in historic Vienna with turn-of-the-century residential buildings, characterised by muted ornamentation and plastered facades in warm light shades. In our design of a residential and commercial building in Apollogasse, we take the historical context as our starting point, but combine it with our contemporary visions. A key element - then as now - is the window, which is the focal point of our architectural design.

HafenCity in Hamburg is a popular new district that has emerged in recent years. A new 8-track secondary school and day care centre will meet the rapidly growing demand for education and care. At the same time, the school will be a meeting place for the local community and associations after school. KHR Architecture was one of 12 teams selected to participate in a closed architectural competition for the prestigious building.

Building Green puts the spotlight on renovation and transformation when it hosts a conference on sustainable transformation in Copenhagen on 25-26 October. Postdoc Cameline Bolbroe will share experiences from KHR's work transforming the listed Gråbrødre School into a modern residential building. The focus has included increasing the building's use value and longevity by involving users through a specially developed modular building system.

Drone video from the School on the Plain

A fresh drone video from Nuuk shows how the "School on the Plain" is finding its shape. Four of the seven buildings are now closed, and the distinctive roof geometry is clearly visible. When completed in 2024, the 17,500 m2 school and adjacent daycare will provide room for 1,200 children.

KHR Architecture is one of the few companies in the construction sector to have received funding from the SMV:Grøn grant to strengthen its green transition.

New pictures from Nuuk, where 17,500 m2 of school and day care facilities in 7 buildings are taking shape. Morten Nøhr Frandsen has just been on site to supervise the new roofs, skylights and insitu concrete. Now you can feel the common areas and the proportions of the atrium spaces and start to look forward to the buildings being filled with life.

We use cookies on our website to give you the most relevant experience by remembering your preferences and repeat visits. By clicking "Accept All", you consent to the use of ALL the cookies. However, you may visit "Cookie Settings" to provide a controlled consent.
Cookie SettingsAccept All
Manage consent

This website uses cookies to improve your experience while you navigate through the website. Out of these, the cookies that are categorized as necessary are stored on your browser as they are essential for the working of basic functionalities of the website. We also use third-party cookies that help us analyze and understand how you use this website. These cookies will be stored in your browser only with your consent. You also have the option to opt-out of these cookies. But opting out of some of these cookies may affect your browsing experience.
Necessary Always activated
Necessary cookies are absolutely essential for the website to function properly. These cookies ensure basic functionalities and security features of the website, anonymously.
Functional
Functional cookies help to perform certain functionalities like sharing the content of the website on social media platforms, collect feedbacks, and other third-party features.
Performance
Performance cookies are used to understand and analyze the key performance indexes of the website which helps in delivering a better user experience for the visitors.
Analytics
Analytical cookies are used to understand how visitors interact with the website. These cookies help provide information on metrics the number of visitors, bounce rate, traffic source, etc.
Advertisement
Advertisement cookies are used to provide visitors with relevant ads and marketing campaigns. These cookies track visitors across websites and collect information to provide customized ads.
Others
Other uncategorized cookies are those that are being analyzed and have not been classified into a category as yet.
GEM & ACCEPTÈR